SaaS and the Psychology of Ownership

Recently, JetBrains announced they're changing their licensing to a SaaS style subscription. The reaction was... less than positive.

I was curious how negative the response actually was. Paging though comments it did seem overwhelming, but I wanted something less subjective. I took four posts with a large number of comments and fed them through text-processing.com's sentiment analysis API. The posts:

The code for analysis and raw data are all in this github repository.

Negative comments outnumbered positive a little more than 2:1. Spot checking the analysis, I think the positive sentiment is overrepresented due to two types of comments: JetBrains staff responding on their own blog were almost always flagged positive and many commenters talked about how much they liked JetBrains products for the bulk of a post but then concluded they didn't like this change. The numbers are graphed below. 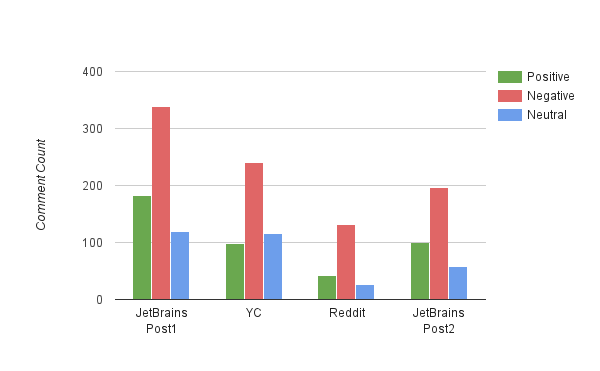 I'm absolutely an IntelliJ apologist. In teams, if someone complains about the tool, I speak up and defend it. I'll offer alternative ways of accomplishing something, submit a bug report, or even write a plugin. I've had a personal license for more than five years, which I originally purchased simply because work didn't upgrade on the first day of a major release. All that said, I do still feel uneasy about this change.

For me, I know it's not about the money. I would pay double what they charge for their software and not think twice about the purchase. Paging through the comments, I do see at least some others in a similar situation; some commenters acknowledge it would be cheaper for them, but they still don't like it. Many other commenters are complaining about the price, but I don't believe for a moment that's the core issue: a price increase would not generate this kind of furor.

I can't answer the question as to why everyone else is upset, but I can answer the question as to why I'm uncomfortable with the change. It's not the concept of SaaS in general that I have a problem with. In the last company I worked for, that's the type of software I actually wrote. Much of the music I listen to uses a similar pricing model: I pay a recurring fee where, if my subscription lapses, I'd lose access. Thinking more broadly, I pay a recurring "subscription fee" to live in my current house and am fine with that.

I tried to come up with a category of software where I would have similar issues. The one that immediately came to mind is the operating system. An analogous situation might be if OSX was subscription based and, if lapsed, I would still have all my files and data but no longer be able to use the operating system (the same way I'd still have source code if my IntelliJ subscription lapsed). I would likely switch back to Linux, similar to how many users are threatening to move to Eclipse.

So, what's makes the OS special? What makes me uncomfortable with a subscription model for this and for my IDE? The key common aspect I believe is how critical these software products are to getting work done. I watched a Cutthroat Kitchen episode the other day and one of the hinderances they added was making the chef cook with a single arm. That's how I feel when I'm using Sublime or Eclipse. And for something so important, I'm just flat out uncomfortable not owning it. It's not about the money. It's not about software phoning home (all my games are in Steam). It's not about a recurring fee (I upgrade IntelliJ every year). It's about renting the critical tools I use to get things done.

Everybody wants to be a SaaS, but JetBrains made a mistake. They just didn't understand their customers' relationship to the software they sell. It was avoidable though. Two years ago, they made a small step in this direction with the personal license change to a subscription for upgrade model. The strongly negative customer reaction should have predicted the current storm. They also could have surveyed customers. As a big fan and someone willing to give their company the benefit of the doubt, I still would have reacted with "Don't do this". The takeaway? As it is so often the case in software development, talk to your customers.